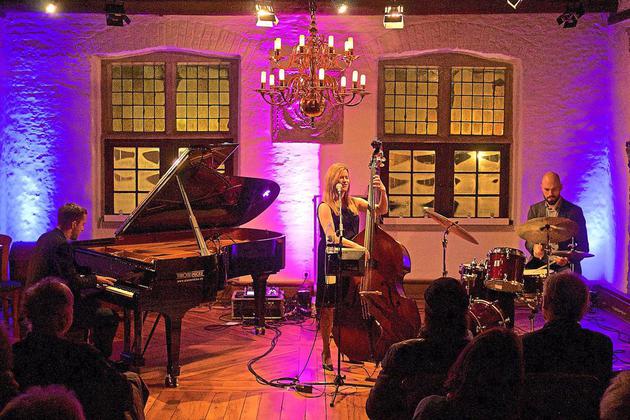 We had such a lovely time in Schöppingen this past Saturday.  The house was packed, the audience was warm and attentive, and the band was swinging.  Who couldn’t have fun with all that?  We’re grateful for the review below (translated through the magic of Google Chrome).  If you’d like to read Yannick Dietrich’s review in German, click here.

Schöppingen – Kristin Korb is all over the world at home. The US citizen living in Denmark, regularly plays concerts in cities such as Paris, London, Berlin or New York, and for some time now already belongs to the European jazz elite. But a bassist and Sängerinn has always preserved: She likes family.

No wonder then that Kristin Korb feels particularly at home in the Old City Hall. That could hear on Saturday evening the Schöppinger audience.

With an incredible composure, the trio ventured to known jazz standards from luminaries such as Leonard Bernstein, Duke Ellington and Stevie Wonder, all of which have strongly influenced the musical life of the bassist. But who now thinks of boring copies big hits, is wrong. For Kristin Korb, pianist Magnus Hjorth and drummer Snorre Kirk have invested a lot of time in finding their own style and let it flow into each piece, in every note.

The results of their work can be seen absolutely, pardon can hear. Here, the recipe for success of the young trio is simple: Kristin Korb belongs to a new, experimental and self-confident generation of jazz. Classical harmony meets with her modern rhythms, almost perfect craftsmanship and incredible passion. A mix that has gone down well not only in Schöppingen.

This new type of jazz is also the basis for Korb’s newest compositions, inspired by different stages of her eventful life. In the Old Town Hall they played as their emotional ballad “58 boxes”, which tells of her way to Denmark, and what it’s like to arrive in a new country. Of course, then could not miss a piece with Danish titles. That was the name of the first words that Kristin Korb has learned in Danish: “Jeg Elsker Dig”, to German “I love you”.

In addition to the superb overall performance of the trio, which had come just for this one gig in Copenhagen to Schöppingen, enthusiastic especially the many solos of the three top instrumentalists audiences. Magnus Hjorth took a creative chord after another out of the wings, while Snorre Kirk repeatedly auftrumpfte with complex, minimalist, loud or soft percussion deposits. And of course there was also lead singer Kristin Korb not take even a few solos, accompanied by the traditional “scat singing,” to give the best.

The last song of the evening was able to unite the end then again all grades of the three Scandinavians. With the cheerful and brisk swing number “Something to Celebrate” is Kristin Korb and her boys goodbye again to the far north. And to celebrate it really was something on Saturday. For international jazz on such a high level, there is not every day that even the culture drenched Schöppingen.