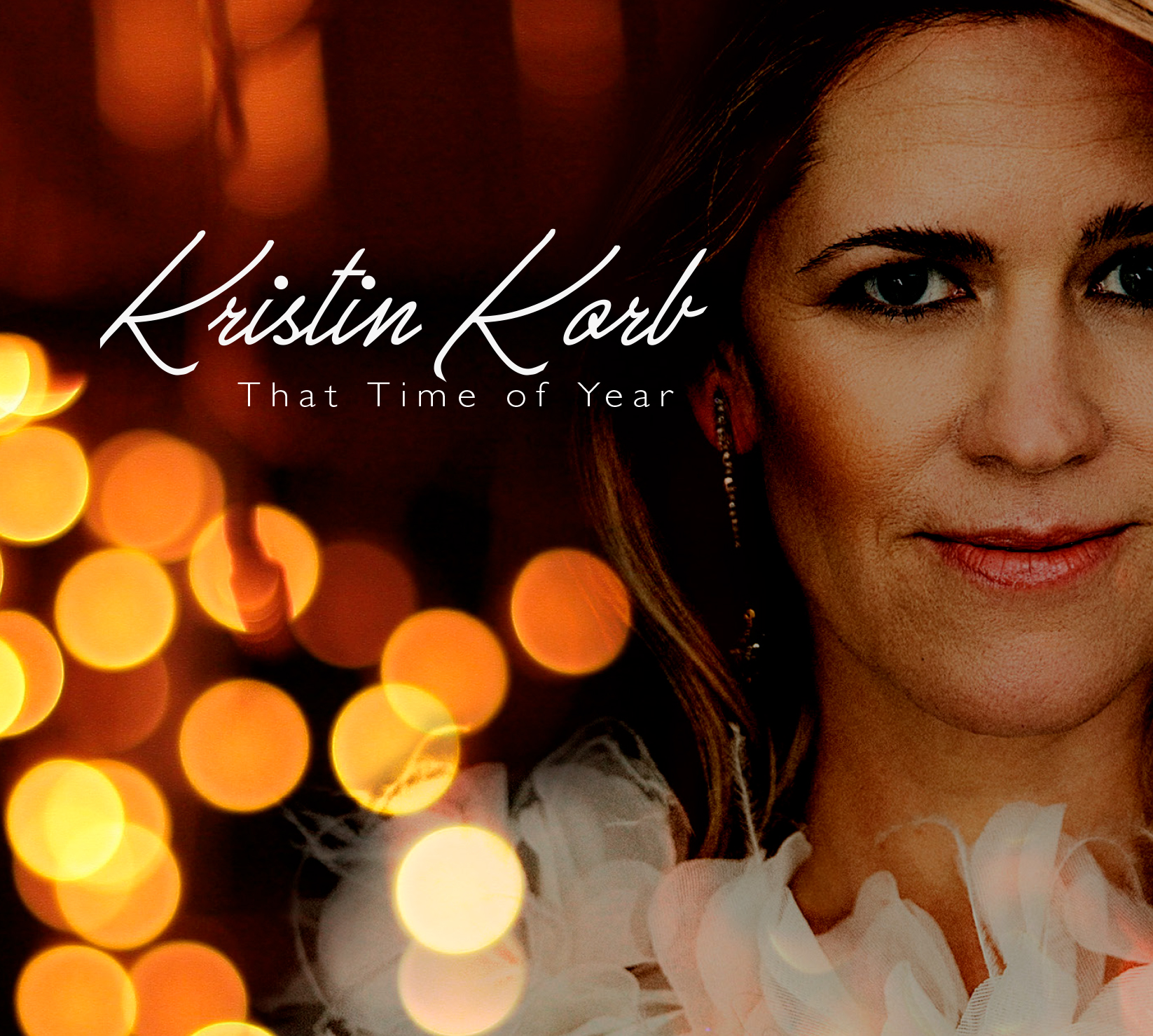 That Time of Year

BUY NOW
CD Universe (US)
JazzKlubben (DK)
Known for her exuberant spirit and contagious optimism, it is only fitting that bassist and vocalist Kristin Korb has recorded a Christmas project to celebrate her 10th CD and first with Storyville Records.
“I wanted to assemble a program that creates a feeling of “hygge” and joy without being overly sweet or boring. I carefully selected songs from my childhood, songs reflecting long-standing friendships, and songs that are just fun and wintery. This is a soundtrack for tree trimming, lighting candles, and hanging out with those you love.”
On board for this project are Korb’s long-standing trio mates Magnus Hjorth, piano, and Snorre Kirk, drums. As a holiday bonus, the trio is joined by Mathias Heise on harmonica. The sound of Heise’s harmonica fits the voice beautifully and adds and extra sparkle to the entire project.
In contrast to Korb’s recent projects, she has included two instrumentals to feature Mathias on the harmonica and the band as a whole. On “We Three Kings”, the bass, harmonica, and piano all take turns at the melody on the journey. “Angels We Have Heard on High” gets a Brazilian makeover, full of festive energy.
Korb captures that feeling of “hygge” with enough playful twists to freshen up last year’s playlist. That Time of Year will be a welcome addition to your treasured holiday collection.

“Denmark-based Kristin Korb‘s That Time of Year pulls off the trick of sounding simultaneously new and traditional. A skilled bassist and a more than capable singer, she imparts warmth to her interpretations of 13 holiday songs. Highlights include her renditions of the Lou Rawls-identified “Christmas Will Really Be Christmas” and Dave Frishberg’s “Snowbound.” Frank-John Hadley, Downbeat Magazine, December 2019 ★★★★

“This Christmas album is a joy.” Doug Ramsey, Rifftides

“Well, finally, an artist has come along, taken both of those old chestnuts (“Here Comes Santa Claus” and “Up on the Housetop”), put them together, and made them sound thoroughly adult.  The whole combo is awesome, here, but keep an eye on Kristin Korb.  She’s the vocalist and bass player.  Vocals aside, even… she plays the hell out of that bass.” Stubby’s House of Christmas

“Starting with a slightly funky “Christmas Will Really Be Christmas” which has Korb singing and scatting soulfully, and continuing with an uptempo “I’ve Got My Love To Keep Me Warm” and a modern rendition of “Winter Wonderland,” Korb and her musicians use the songs as vehicles for creative improvisations while still retaining the essence of the tunes.” Scott Yanow, L.A. Jazz Scene

“A former student of Ray Brown, she sets irresistible grooves that swing without effort. Her vocals are also sharply focused with a total lack of artifice. I must confess that this album was my first exposure to Ms. Korb, but I can assure you that her work will be featured in future issues. Thomas Cunniffe, Jazz History Online

SONGS THAT BUG ME (OR USED TO)

Santa Baby – I’ve never really liked this song. I’ve heard it way too many times and it is always done the same way. Booooorrrring! However, my friend Susanne loves, loves, LOVES it. She told me that I should do it. To appease her, I gave it a shot. It was 10:00 in the morning and Mathias had just arrived at the studio. I asked him to come on in and jam with me. We made three passes at it and had a blast. This comes from the 3rd take, no edits or overdubs. The first 2 takes were our rehearsals.

I’ve Got My Love to Keep Me Warm – In spite of the plethora of recordings that exist of this Irving Berlin classic, the one that keeps repeating in my head is the Remix of Kay Starr’s version. It is everywhere during the holidays and it sticks in my head like a disc that can’t make it past the title. I had to find a way to get myself over it. I’ve always been intrigued with playing songs at a fast tempo, but relax the singing so it doesn’t feel nearly as hurried. This was the perfect vehicle for that sensibility. This is the happy place I go to now when I hear that horrendous remix.

SONGS FROM MY CHILDHOOD:

Up on the Housetop / Here Comes Santa Claus – As a kid, I had a record player and a special box that held my treasured records. One of the few albums I remember from that time period is “Santa Claus is Coming to Town” by the Peppermint Kandy Kids. Looking online to see what was on that album, I’m sure I had at least one other Christmas record, but I can’t seem to find the record. Anyway, “Up on the Housetop” was one of my faves growing up. I don’t know why. It just was. I also loved “I’m Getting Nuttin’ for Christmas”, but we’re not going there right now.

On another note, my dad used to dance around the house singing, “Here comes Santa Claus! Here comes Santa Claus!” during the month of December. I think that may have also been a punchline to a joke that I can’t share. (It would explain his chuckling after he finished singing.) I will never be able to sing this song without thinking of my dad.

When I perplexed over what I should do for an arrangement, I like to sleep on it. I’ve been known to have some of my best musical ideas occur to me while I’m sleeping. (It is amazing how much the brain processes ideas while we sleep!) I had a weird dream about being at an Oscar Peterson concert (with Ray Brown on bass and Ed Thigpen on drums) with this arrangement. There weren’t any vocals on the version, but I had the feeling that they were inviting me to be a part of the band.

I still heard my dad’s voice on “Here Comes Santa Claus”. I said the dream was weird.

Christmas Time is Here – The Charlie Brown Christmas Special was an annual experience in my household (along with Rudolph’s and Frosty’s Christmas specials). While this was not such a big deal in Scandinavia, this was a huge part of growing up in the USA during the 1970’s. Of all the songs that Vince Guaraldi wrote for the various Charlie Brown specials, this is the one that sticks with us all. It embodies the wonderment, but also acknowledges the reality that life doesn’t always reflect the wonderment that we hope for. Mathias’ harmonica brings out the longing for that wonderment in a beautiful way.

Winter Wonderland – OMG this is also a Peppermint Kandy Kids track! I had totally forgotten, but it is apparently, deep within my being. Listening to it on YouTube, I think the harmony vocal parts stuck more than anything, but I don’t want to get too Freudian about it. Anyway, the track itself is quite repetitious and forgettable on the Kandy Kids version. Maybe that is why I needed to do something else with it. I wanted to find another relationship or frame for this song. It lends itself naturally to a swing feel, but that was too easy. I wanted it to breathe more and enjoy the sights as you take in the view. This quasi-afro-cuban-ish groove lends itself well to the spaciousness.

We Three Kings – I moved to San Diego in 1992 to attend the University of California, San Diego for graduate school. My bass teacher, Bertram Turetzky, hooked me up early on with the talented Keeling family from Del Mar. Paul Keeling played keyboards and we played a LOT of jobs together my first few years in San Diego. I have an old chart from a holiday gig we played together that was a bunch of “chicken scratches” and memories. Based on the “scratches”, this is an updated memory that I have from my first December surrounded by sunny beaches and summer clothes.

Angels We Have Heard on High – Pamela York is probably my closest friend from those San Diego days. We met shortly after she moved to town and we hit it off immediately. We would meet once a week to work out new material, challenge each other to expand our repertoire, and eat lunch and commiserate. We also played a lot of duo gigs together. (Pam, I still have you’re your book of arrangements!) Most of this arrangement comes from Pamela. She is an accomplished pianist, composer, mom, wife, and amazing woman now living in the Houston area.

Silent Night – In my Los Angeles days, Todd Johnson and I played a bunch of duo concerts and even made a tour together in the Pacific Northwest. This wasn’t your typical duo because Todd plays 6-string electric bass. He could do all the melodies, chords, and bass lines without me, but we had too much fun hanging out. I have fond memories of the many dinners I shared with Todd, Mrs. Wonderful (Gay), and Todd’s parents. They all took me in as a part of their family. The core of this arrangement comes from Todd.

Living in Denmark, I have discovered that the Danes really enjoy singing together in “fællessang”. I like using this song as the good night sing along using the first 2 verses in English, letting the guys solo, and then come back with 2 verses in Danish with everyone joining in. It is super cozy! (Yes, I’m singing in Danish now. HOWEVER, you will only catch me doing it live. It’s all in English on this recording.)

Snowbound – Traveling back to Montana for Christmas 2017 was an adventure. I almost couldn’t get out of the state because there was so much snow. I heard that they even set records for the most snow ever recorded in the state’s history. This Dave Frishberg tune makes the most out of the situation.

I’ve Got My Love to Keep Me Warm – This applies well in this category, but also fits with songs that bug me (or at least used to).

Winter Wonderland – I was initially thinking of this song as one of those seasonal tunes, but then I saw that it was on that Kandy Kid record….

WHAT I THINK THIS SEASON SHOULD REALLY BE ABOUT

There tends to be a lot of unnecessary pressure put on folks this time of year. For many, this is the worst season of all. It can be alienating, stressful, and incredibly sad. I’m lucky that I enjoy it and I’m surrounded by lots of love. For those of us who have that surplus of positive vibes, we need to be aware of those less fortunate, reach out, and give the gift of openness, kindness and respect.

Christmas Will Really Be Christmas – Lou Rawls sang the stuffing out of this song. More people should know about it.

That’s What I Want for Christmas – When it comes to giving gifts at the holidays, I’m probably one of the worst. I’d rather buy a gift for someone impulsively when I see something that I know they’ll dig. Doing it because a holiday mandates it makes me cringe. Yes, I enjoy receiving gifts, but it really isn’t a driving thing for me.

Count Your Blessings – This song comes from Irving Berlin’s “White Christmas”. It gets counted as a holiday song because of the show, but I think the theme is good all year round.

Christmas Is – Listening to Lou Rawls swagger his way through this song, I couldn’t help but want to sing it. Researching the song, it appears to consist of a single section that keeps looping. While Rawls was convincing in his presentation, the song never really feels complete to me. My arrangement gives it a structure that feels more like me in the romping and stomping department. I may have added some of my own lyrics as well.